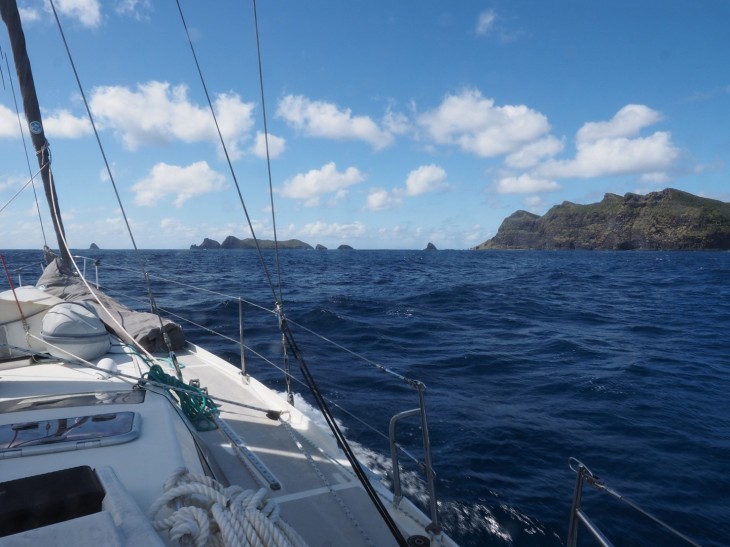 Heading around the north of the island

The Coral Sea had been in an angry mood for the past week as we set off from Lord Howe on the back of a small passing low pressure system. The sea state reflected this as we had messy swells and waves, including a nasty cross-wave which every now and then slapped JoliFou hard on her topsides, splashing water into the cockpit. The wind was however a perfect southerly direction at 25 knots and we made good progress despite contrary current and a very conservative sail plan of 2 reefs and a half-furled headsail.

Our stay at Lord Howe was much longer than anticipated as we watched a number of frontal lows come through, with the wind reverting to the north-east soon after. Finally it looked good to leave on Sunday the 28th of August on a southerly flow after a small low had passed to the north of us, so Saturday was to be our last full day at the island. There was a bit of rain around but we wanted to visit Ned’s beach and feed the fish, which we had not yet done. The honesty system down at the hut at Ned’s is really charming, help yourself to a wetsuit, face mask, snorkel and fins and leave the money in the honesty box. 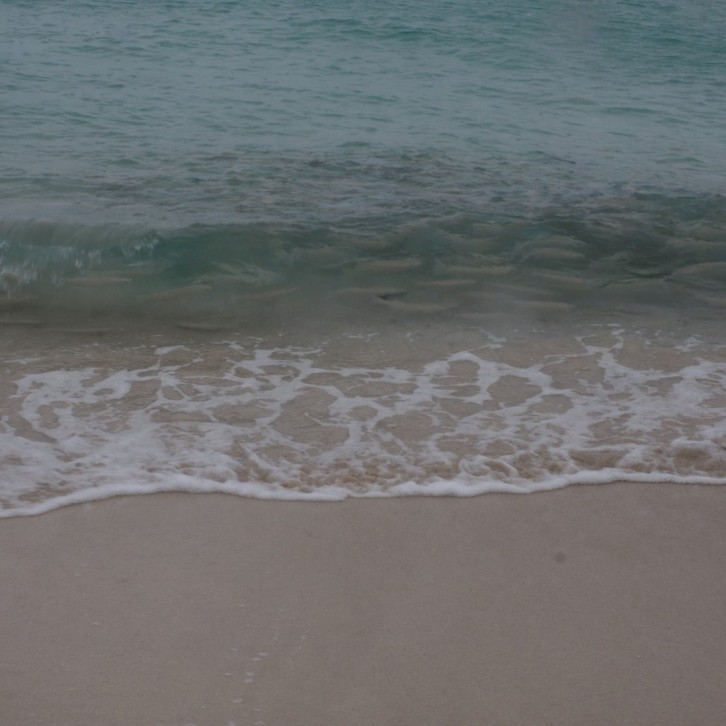 Ned’s beach on a rainy day

We put a dollar in the vending machine to get a cup of fish food and fed the fish down at the water’s edge. They obviously have been trained to expect this as there seems to be a crowd waiting on the next meal from a generous tourist. It had started raining and a very nice man gave us a lift back to the anchorage café. 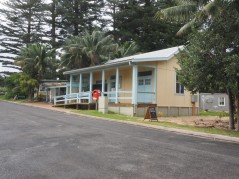 Looking south at a shrinking island

Next morning it was final preparations before our planned late morning departure. It was a stressful time as the wind was strong from the South and the mooring really boisterous as we struggled with removing the dinghy motor and hoisting the dinghy onto the foredeck. I had a very cold swim, unshackling our anchor chain from the mooring. Finally it was time, we hoisted a 3 reef mainsail on the mooring for stability and motor sailed out of the North passage under Christo’s guidance. 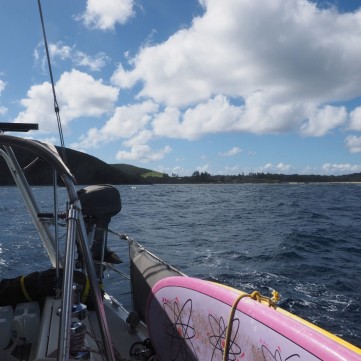 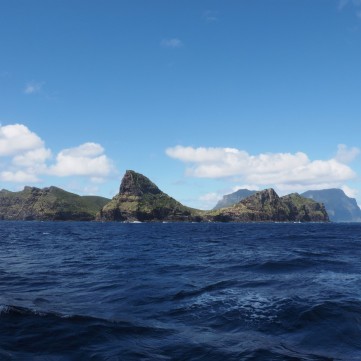 We unfurled the jib and started off towards New Cal, with beautiful views of Lord Howe and Balls Pyramid receding behind us. 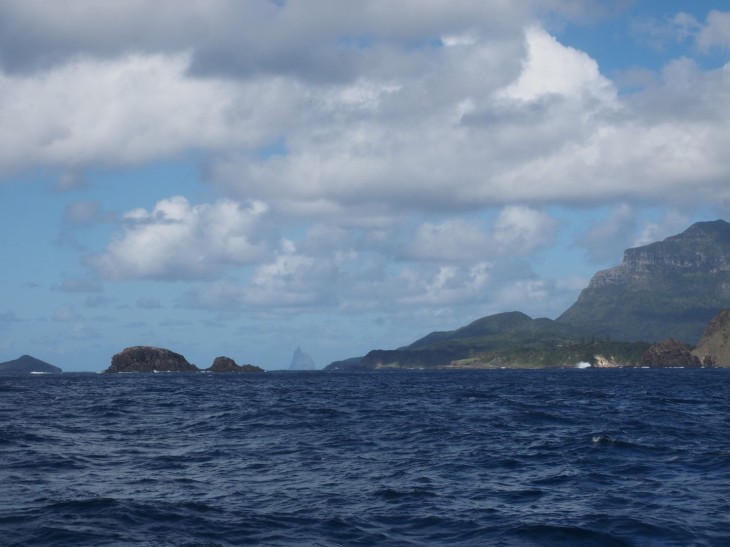 Balls Pyramid in the distance

The direct course from Lord Howe to Noumea is north-east and the weather routing had indicated that the wind direction would start south and back progressively further around to the east. In order to avoid a bad wind angle too much on the nose later we made easting whenever we could, particularly in the beginning and as the wind lightened off a bit over the next couple of days.

Happy to be at sea

The sea state improved after the second day and we had a range of beam to just forward of the beam reaching, adjusting the main reefs and jib furling according to the wind direction and strength. For the last couple of days the wind increased to about 20 knots and was around 80 degrees true wind angle, so the staysail went up and did its job well. In stronger wind forward of the beam we find that the boat dances over the waves much better under staysail, the headsail tending to drive the bow down more. The spinnaker pole remained stowed on the mast, and the starboard runner remained tight as we kept on starboard tack for the entire trip. Not one tack or gybe the whole way.

We saw dolphins on one occasion briefly and whales twice, but quite far away. This was much better than last year on this route where we saw nothing at all. Watches were a mellow affair as we never saw another vessel the whole way. With the protection of the AIS alarm and the auto-pilot steering, most of the watch was spent relaxing on one’s back on the cockpit cushions.

New Caledonia rises with the sun

At one stage we were concerned that we might not be able to arrive before closing of the immigration office at 11:30AM on Friday, hence possibly being confined to the boat for the weekend.

We need not have worried as our final half day and approach to Boulari pass at first light on Friday the 2nd of September was absolutely perfect sailing. Flat sea, the wind had freed a bit and blowing about 20 knots. We had to slow down just a little so as to arrive on sunrise and we continued sailing all the way through the pass and all the way to Noumea harbour before dropping the sails and motoring into Port Mosselle marina just after the office opened, prefect timing! The trip had taken about 4 and a half days. 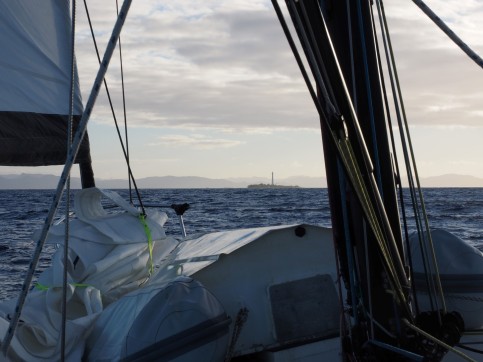 What a welcoming sight, seeing Pete’s grinning face as we approached the marina. Akimbo had arrived 3 days ahead of us, having spent a long time waiting for the weather window to allow passage from the Gold Coast. From last year, we knew the formalities well and I walked over to the immigration office with the passports whilst Lyn waited on the customs officials at the boat. All done quite quickly and zero charges, Australia should learn a thing or two.

Port Moselle. Pretty, but a bit smelly at times.

We spent the rest of the day washing down the boat, inside and out and putting mattresses and bedding out to dry as we had taken a little water through an annoying deck-coachroof seal leak. After a much-needed refreshing shower and a couple of beers it was time for an early night and a good sleep.

We stayed in the marina another two nights, leaving on Monday the 5th September. The time was mostly spent on boat tasks. I emptied, cleaned and dried the front sail locker, repairing some badly rusted hose clamps on the bilge pump. Lyn did a few loads of washing, washed the boat inside and also did some remote work for her LCD lighting company. The leak was found and fixed by cleaning out and filling with Sika 291, the outboard was serviced with new plugs. I decided we had way too many old ropes in the sail locker and hung them at the end of the dock with a “free rope” sign, soon snapped up, ironically mostly by our Kiwi neighbor on the dock.

Between boat tasks there was the obligatory sundowner drinks with Pete and Ness from “Akimbo”, Dave and Roz from “Barefoot” and meeting new friends Bob and Lucinda from “Chance”. Such is the cruising way.