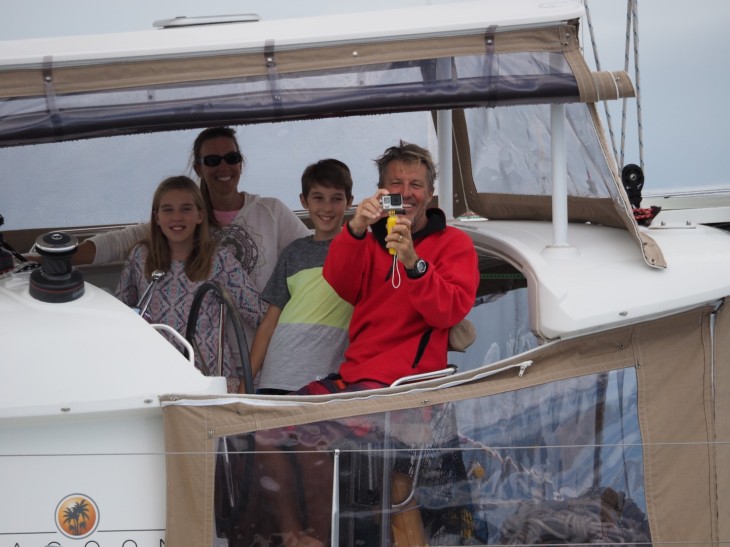 “I’m going to trimaran you!” yells Dave from behind us across the ever-decreasing gap of water. “Time to shake out that reef, quick Lyn”, says I, starting to worry about losing the bragging rights at tonight’s debriefing drinks.

Our cruising friend Jim of “Insatiable 2” is a very wise and amusing man. He says: “If you are sailing somewhere and another yacht is going the same direction then it is a race, unless the other boat is faster than you”. Well you can imagine what happens when the skippers of said boats have a history of racing against each other at the top level in South Africa. What ensued was a series of day-sail races up the North West coast of New Caledonia, interspersed with awesome scenery, great anchorages and rekindling of a special friendship.

David Hibberd and I were fierce rivals in the Laser class in South Africa in our youth, and later good friends and team-mates at the Olympics in 1996. He and his wife Goodryn immigrated to the US around the same time as Lyn and I immigrated to Australia and we had not seen each other in over 20 years. It was a dream re-union when we happened to meet up in New Caledonia as he and his family (Goodrun, Ben and Gabbie) were stopping there as part of their circumnavigation on their Lagoon 400 “Cool Runnings”.

Being on a very similar schedule heading to Bundaberg, we decided to cruise in company. The basic plan was to work our way up the NW coast of New Caledonia before heading offshore. We also hoped to make a stop in the Chesterfield reefs if weather permitted.

After a few days of kiting at Maitre, we cleared out of Noumea on a rainy Monday morning November 21 and headed North in a strong Easterly wind, stopping at one of our favourite anchorages Puen. The swell was up so we set off early in the morning and a couple hours later we were anchored off Ouano looking at perfect lefts peeling down the reef, no-one out. 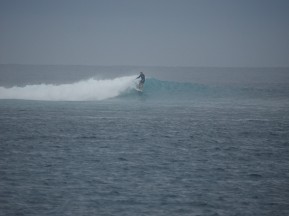 Dave and I wasted no time at all getting ready and Lyn ran us out to the take-off spot on the dinghy. Dave was a bit out of practice and unfit but courageously struggled against his over-size wetsuit, taking a few big wipeouts before getting a couple of waves. I had an awesome surf, one of my best sessions at Ouano.

It was bittersweet to say goodbye to my favourite surf break but we had to keep trucking North as we wanted to make Bourail before nightfall.

The wind building from the North East made for a fantastic sail in smooth water, just outside the crashing reef waves. The scenery with waves in foreground against the beautiful mountainous back-drop was spectacular.

The last couple of miles into Bourail were awesome, with the various surf breaks lighting up alongside us.

The break at the final corner of the pass before entering sheltered waters (Green Island Left) was particularly perfect (no-one on it), but it was getting late in the day and brown river water was about to reach this spot, so I resisted the temptation.

My decision not to surf was validated shortly afterwards when we observed two bull sharks swimming around the muddy waters of the anchorage. 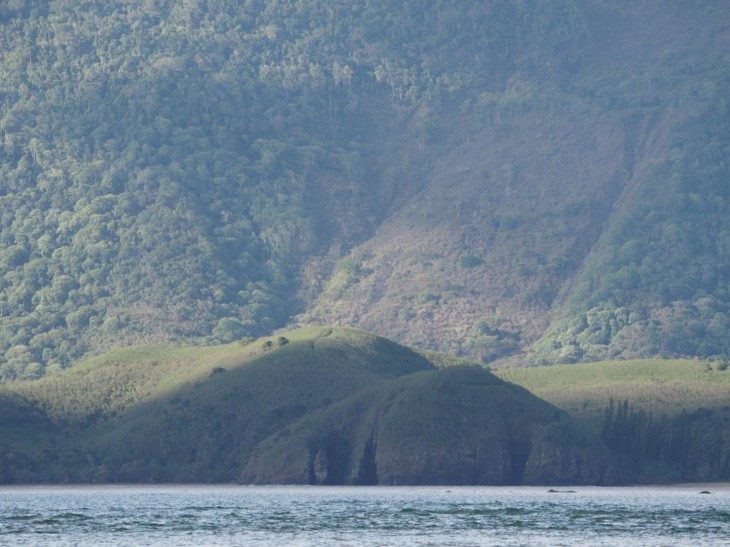 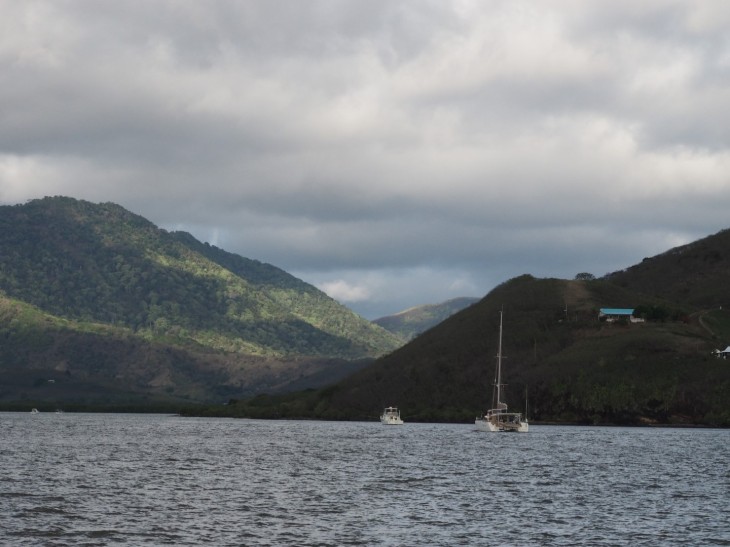 This place has a sharky reputation and has been the scene of a few attacks over the years. After sundowner drinks on Cool Runnings we were on our way back to Jolifou in the dinghy when something hit us! Hard! We were moving slowly so it was not us hitting a log or something and it jolted the boat a lot! Although we didn’t see anything in the dark, we are convinced it was a shark.

We were understandably reluctant to surf the next morning despite perfect waves (again no-one else surfing) and we set off Northwards in light off-shore breeze, headed for Duroc Pass. The swell was again big and we again were treated to spectacular scenery of waves on the reef and mountains as we sailed and motor-sailed in the light wind. 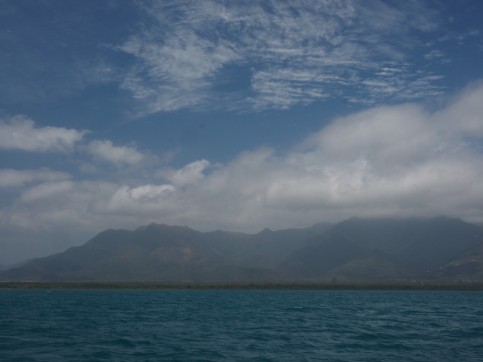 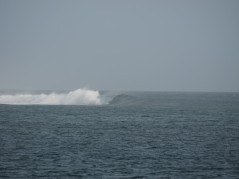 We anchored at the pretty and unpretentious Chasseloup Bay for the night, having a quick little explore and rubbish-run ashore before dark.

We were now once more inside the lagoon and on Thursday 24th November we used the light to moderate wind to sail inside the reef to Koumac. The wind direction moved from the North East around to the South West and we even spent some time tacking upwind! Jolifou easily took out the race despite a desperate gennaker-flying charge from Cool Runnings at the end.

Koumac anchorage area is a quaint pretty little place, not much to it. There is a nice little dinghy yacht club and a small marina. We had a bit of a walk around the place and came across this amazing outdoor gym. For some reason the fuel dock at the marina was out of order and Dave ended up getting a lift with jerry cans into town with a very nice local.

The kids realized that it was Thanksgiving and invited us to Cool Runnings for dinner. It was Lyn and I’s first Thanksgiving celebration. The mediocre food (canned turkey) was more than made up for by the delightful company, a fantastic evening.

Dave and I had been constantly monitoring Predictwind forecasts and discussing options for leaving for the Chesterfields and Bundaberg. A closed cell tropical low was forecast to develop North of the Chesterfields which would potentially cause strong Northerlies there, which is bad as there is no protected anchorage in that wind direction. In fact the depression could also have a bad impact on a direct Bundaberg course. We decided to make ready for passage and head a bit more North in New Cal before final leaving decision. 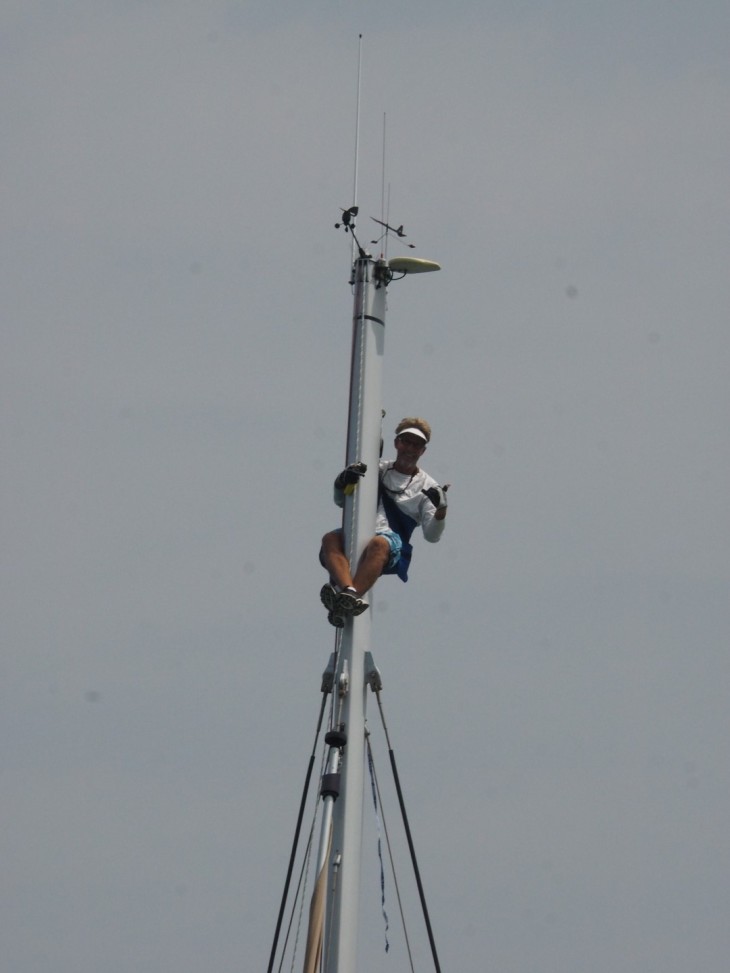 We then sailed and motored to a beautiful anchorage at Tanle Island.

We spent Saturday the 26th at Tanle. Lyn and I did a SUP paddle around the island which is very beautiful. I also gave the boat a bit of a bottom clean, taking advantage of being in the least sharky anchorage we’d been at for a while.

By Sunday morning the models were looking better on the tropical depression and we made a snap decision to leave for Bundaberg. After securing the dinghy on the foredeck we motored out through the pass, the waves were still beautiful with a big swell.

The wind filled in gradually from the South East making a good broad reaching angle but the seas were quite rough with the wind across the large South West swell direction. Skies were grey with persistent light rain and cloud.

The wind remained quite strong from the South East for the entire trip, making for great sailing as the seas and weather gradually improved. We made sure to remain in VHF radio range (and AIS range) of Cool Runnings the whole way. The boats are quite evenly matched though Jolifou was a bit faster at the broadish angles of our course, forcing us to use a bit less sail than normal which was fine and nice and comfortable. There was a lot of banter on the VHF radio, continuing on from our shenanigans in New Caledonia with numerous word plays on the boat names, something like this:-

“Jolly Fool, Jolly Fool this is Fast Runnings”. “Tummy Running, this is Jolly Cool, over”. Etc.

The only events of note was Cool Runnings blowing their gennaker halyard block (pushing it too hard again Dave) and us blowing an engine impeller just as we decided to run the engine to make sure we crossed a ship on final Aus approach (of course it was dark and 3 in the morning). Getting bits of impeller out of the heat exchanger whilst the boat was wallowing around in the lighter wind was not a pleasant task.

The light wind meant a fair bit of motoring on the final day but we were consoled by being greeted by a pod of dolphins outside breaksea spit. The wind increased from the North West on final approach and we reached into Port Bundaberg, looking forward to a hot shower, burger and beer!

By jolifou in Uncategorized on April 25, 2018.
← Tripping at Tenia Passage to Fiji →