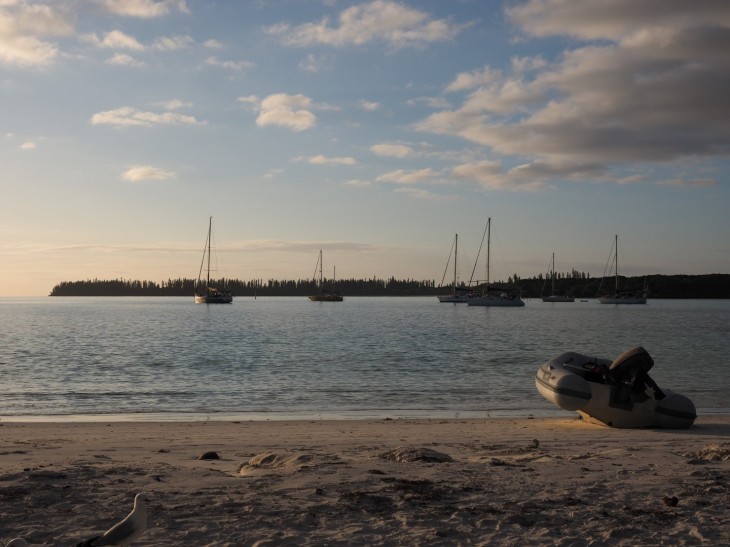 The sun was getting lower in the sky as we enjoyed the perfect weather over a couple of beers on Kanumera beach. In the distance our friend Steve was having a mellow sail around to the Kanumera anchorage, very light wind, mainsail only. We watched his slow progress, too slow?? Facing the wrong way? Oh my god, he’s on the reef!

On Wednesday morning the 21st September a nice Southerly wind was blowing and we left Mato for Gadji on the north tip of the Isle of Pines. Just for fun we took the direct eastward route, through the incompletely charted reefs, using the good light to pick our route through the reef. We found the charted positons of the reefs actually pretty accurate. 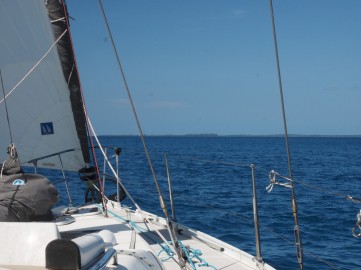 Arriving mid-afternoon with the tide low, we anchored at the outer Gadji Anchorage.

Whilst exploring the mushroom islands terrain on the SUPs we met Dave and Erica from “Seacomber” who invited us for a drink along with Mike and Sasha from “Moonfish”.

Dave and Erica have a great situation, Seacomber is owned by an older wealthy South African who is apparently a lovely guy and employs them to run the boat and when he is not aboard they can do as they please. They cruise aboard the boat with their two gorgeous 4 year olds, twin daughters Zoe and Jasmine. Moonfish is a beautiful aluminium catamaran and Mike and Sasha are kiters and surfers so share our love of the action sports. Kiwis can drink!

Next morning we all went for a dive at the Garden of Eden site out at the Bumbu pass, which Lyn and I are by now very familiar with.

Looking southwards towards Ngie island, can see the edge of the drop-off, start of the Garden of Eden dive

Drifting inwards with the incoming tide, it was a really nice dive as usual but nothing special in the fish department except a large Maori Wrasse. On getting back to the boat, we moved into the inner anchorage which is spectacularly beautiful and much better protection and holding. In the afternoon we joined Mike for a SUP paddle and drinks on Moonfish became an unexpected dinner.

What would Tim do?

Friday the 23rd of September is a special and sad day for us. This is the anniversary of my dear brother Tim’s passing. Not by conscious plan, we found ourselves in the exact same place where we had received the tragic news last year. Fitting the mood, the weather was just a bit cloudy, casting a duller and sadder filter on the spectacular colours of this place. We spent the day quietly, in mourning and remembrance including a “What Would Tim Do” whisky photo shoot on the beach and video conference calls with the family. After the photo shoot we said: “what would Tim do?” and drank the glasses of whisky. 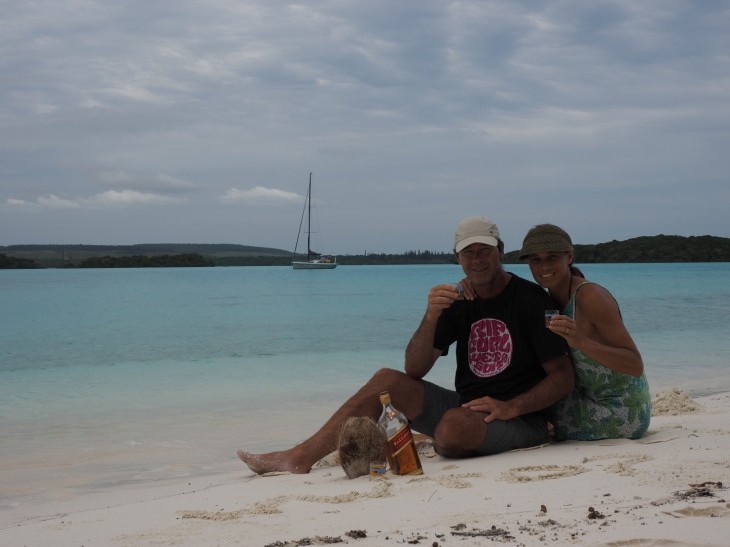 What Tim would do

Where are the village people?

The local dive boat had said we should get permission from the locals to dive here, so on the Saturday we paddled into the “village” area at the inner beach.

Looks prettier than it was

All we found was the lady running the vanilla farm tours who was lovely but didn’t really seem to get the question. “No boats allowed!” was her response. We also met a group of French from Noumea who were on a weekend clue hunt game, seemed like a lot of fun. On getting back to JoliFou a catamaran named “Phase Two” arrived in the anchorage and we met Warren and Deborah from Queensland.

On Sunday morning we went for a snorkel outside the reef drop-off left of the mushroom rock. It’s a very beautiful area with pristine coral, interesting gullies and we saw a white tip reef shark and plenty of pretty little fish.

Snorkel area is out past the rock

Once the tide had come up a bit, we headed off, sailing to Oro on the north east coast of the island. 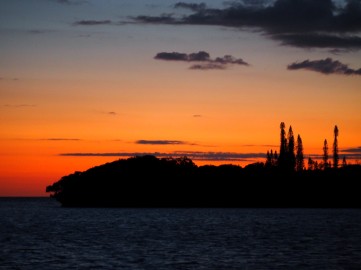 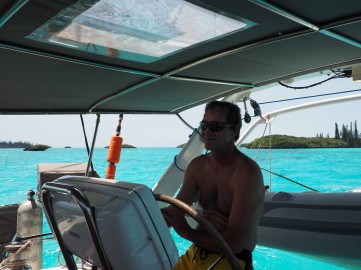 Picking our way out of Gadji anchorage area

It was a really mellow sail with jib only in the offshore Westerly wind and flat water. We navigated around the left of the mushroom rock and into the inner anchorage.

Inside the mushroom rock

Oro can be a bit exposed to the easterly winds which usually predominate here, but we were enjoying a very strange prolonged period of Westerly winds and perfect sunny weather. In these conditions Oro is close to boater’s paradise. The one blight here is the Meridian resort on one of the beaches but if one turns a blind eye and avoids this area there is plenty of remote beautiful spots. Within paddling distance from the anchorage there are three islands with channels between them, limestone sea cliff caves, secluded beaches and pine trees. Beautiful coral everywhere, fun SUP surfing on the little breaking waves on the reef, great snorkelling and diving. 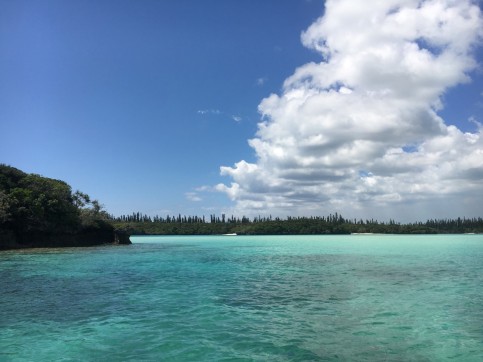 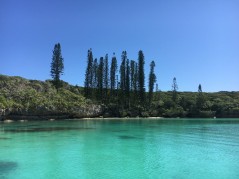 Up the channel, “penis rock” bay 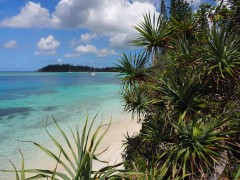 View from on top of one of the islands 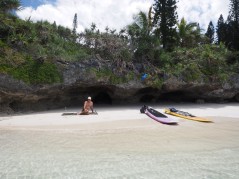 We stayed there for four glorious days, exploring the area on SUPS, making new friends with the crews from catamarans “Phase Two” and “Sky Pond”, Beneteaus “Quick Star” and “Serenity 2” over sundowners. We paddled down the outside coast past the “natural aquarium” entrance and back and discovered a likely looking dive site off the point of the bay. Returning the next morning we had a surprisingly excellent dive with the terrain and fish size improving the further we went, big swim throughs and big schools of big fish. 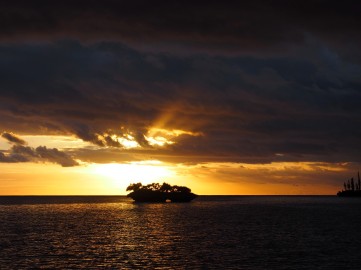 On Friday the 30th September the wind was forecast to go around to the east and north east, not a good direction for Oro anchorage. We sailed and motored around the beautiful east coast of the island towards Kuto. Unfortunately a lot of this area is out of bounds to cruising boats without getting special permission from the chief of the island.

A beautiful beach on the east coast

Ndju pass was beautiful despite a contrary current of 3 knots. There was a reasonable swell running and we had a look at what looks like a really nice left surfing break on the North West corner of Nekanmue Atoll. The strong tide in the wrong direction would have made it a really difficult paddle, even if we had anchored there despite knowing it is one of the areas forbidden by the Kanak locals. We had time for a SUP paddle around Kuto bay before chocolate cake tea (and drinks) on Quick Star for Ben’s 8th birthday.

Kuto beach looking across the land to Kanumera bay 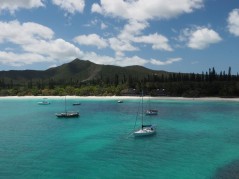 Kuto, Quick Star with hotel behind

On Saturday Lyn rode her Brompton to Vao market for stocks whilst I did a rubbish run. Later we had a walk and swim at Kanumera beach, then drinks and snacks on the beach.

I’ve got my eye on her 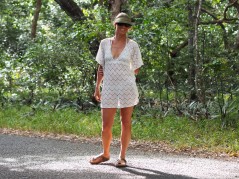 Pretty girl on the road 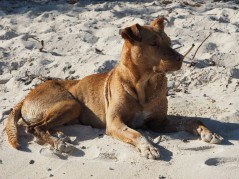 Serenity on the reef

This was when we noticed that Steve had put “Serenity 2” on the reef. Not having a radio with us, by the time we realised what was going on James and Rebecca of “Quick Star” were already out there helping in their dinghy and a police launch was on the way.

Steve had apparently been cruising along really slowly at 2 knots, reading a book and not noticed that the current was sweeping him sideways onto the reef. The boat ended up wedged sideways and when it hit Steve naturally reversed, which actually exacerbated the position. Rebecca and James did a sterling job of standing on the reef and guiding the boat out between the shallow bits before the police launch pulled it off. When they arrived back at the anchorage a freezing and exhausted James and Rebecca needed to return to their kids on the boat. Lyn and I took a bottle of whisky over to Steve and consoled him with alcohol.

Steve is a very interesting man from Albany in Western Australia. His wife and cruising companion passed away 3 years ago and he was grief stricken, drinking a lot and on a path towards joining her. One night “after a few beers and a bottle of wine” he decided to sail around Australia. He literally left that same night at 10PM and that’s what he did. He says that decision saved his life, and he has been sailing his boat single handed ever since. He has an eccentric way of going about things but his great seamanship has so far saved him and “Serenity 2” from the situations he’s put himself in.

Steve doesn’t do under water, so next morning I went across and snorkelled down to assess the damage and take photos. Remarkably just cosmetic damage to the bottom areas of the keel and a bit of a chip out of the trailing edge of the rudder. 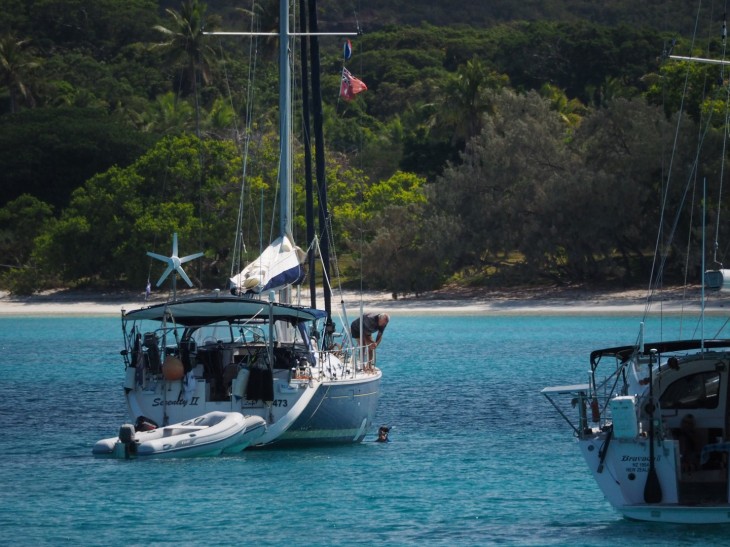 Lyn climbed up on top of the targa arch in her quest for good turtle photographs. 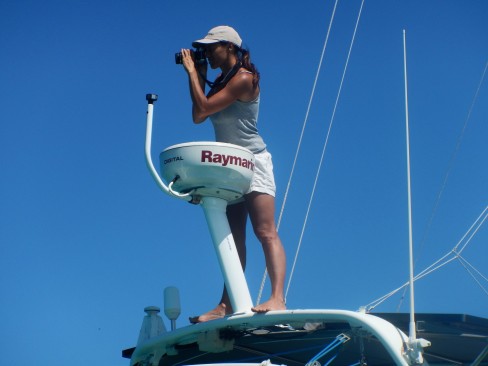 Later we took Jolifou around to Kanumera bay for a change of scenery and better shelter from the south westerly wind. We took the SUPs with picnic lunch to nearby Adventure Island, a good adventure and we saw plenty of beautiful sea snakes there.

That night we had drinks on “Chance” with Bob and Lucinda. They are very interesting, truly old school cruisers who lament the days where navigation was much more than reading a screen. They hand steer everywhere.

Early on Monday morning Lyn and Bob went for a bike ride around the island which Lyn had been talked into over a glass of red the previous night. Bob nearly killed her as he is a really strong bike rider.

We then motored across to Brosse Island, anchoring in the tiny inner lagoon. A sea snake swam up to the transom, trying to get on the boat.

Lyn did some work whilst I paddled around the island. 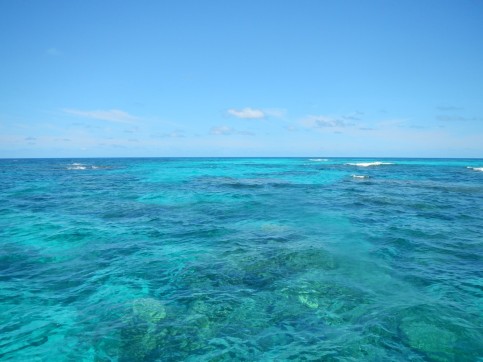 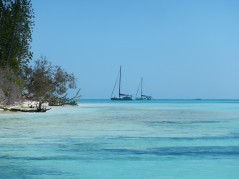 JoliFou and Quick Star at Brosse

Stunning beaches and bays, North side of Brosse

In the afternoon we went for a snorkel on the western side of the island, an area we now call “turtle reef”. Apart from the many turtles there are numerous swim-throughs, gullies, different coral and seaweeds, many fish and rays. That night we had a fire barbecue on the beach with Quick Star and some new Australian friends from a charter motor cat.

Next day we both paddled around the island, and I had a fun surf on a tiny lefthander on the outer reef. With the wind going round to the North West, we headed back over to Kanumera bay. In the afternoon we walked to the shop for a rare treat of ice-creams (2 each!). 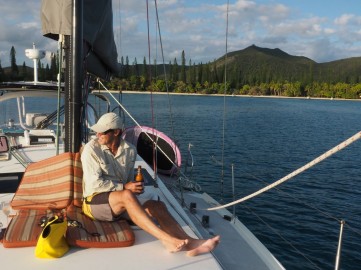 Feeling like we had truly “done” the Isle of Pines, and with good kiting wind on its way, on Wednesday the 5th of October we set off  motoring towards Maitre across a beautiful glassy sea.