For many years we have known that we ultimately wanted to live on a boat and cruise the world. In May 2013 we decided to start to make this a reality and began actively looking for the right boat. Friends of ours coined the phrase “boat porn”, which is a very apt description for browsing the numerous listings of second-hand boats on web sites such as yacht world. After the GFC, boat prices in the US and Europe were very low compared with Australia so the initial thought was to buy a boat in the US. After all, it doesn’t make much difference where you start cruising from does it? After a while we started thinking that in fact it would make a lot of sense if we could source a boat locally because we would then be able to sell the house and easily move our belongings (some of) onto it and remain working and earning money whilst refurbishing the boat.

We had decided that the best deals were blue water (not charter) boats from around the 1980s era, when they were built strong to last long. Examples of the kind of boat were the Peterson 44 and the Savage 42 as we also liked the center cockpit aft cabin configuration. The main compromise in cruising boats is live-aboard comfort vs sailing performance. A wide, heavy boat with great accommodation will sail like a dog, or on the other end of the scale, a narrow light boat might sail great but have very little space and ability to carry one’s life clutter. Being racing sailors it would drive us batty to be stuck on a boat that sailed like a pig. The boat needed to sail well, not necessarily super-fast but to be a true sailing boat.

After looking at a few boats around Sydney we, decided to cast a wider net and spent a weekend up in Newcastle staying with our friends Joe and Belinda. After looking at a Savage 42 and a CYC 42 which both looked like good options we noticed an aluminium boat without a mast outside Joe and Belinda’s boatyard. Joe told us the story of the boat and we had a bit of a look at it on deck and through the windows (it was locked). The Allures 44 was owned by a Swiss French couple who had been cruising for 5 years when they had the misfortune of hitting a freighter when departing Australia for Indonesia. The rig was lost, a dent in the side and other damage to the biminy and aerials etc. They got the boat back to Bowen and the insurers contacted Joe and it was trucked down to his boatyard in Newcastle for repair quotes etc. When we saw it there had been an ongoing insurance amount dispute for almost a year. After researching the Allures 44 we became excited about the boat which normally would have been way beyond our budget. We have always admired French aluminium lifting board boats but they tend to be pricey, especially recent vintage ones such as the Allures.

Joe said he would ask the owners if they were interested in selling in Australia rather than shipping back to France for repairs there (which was the original plan). We thought that this was all a long shot but when Joe came back and said they may be interested and what could we pay, we made an offer. One thing lead to another and after some hiccups (importation etc.) we were the proud owners of a damaged Allures 44 with no mast (eek).

Anyone interested in detail on the work we did to restore the boat should look at the section on this site on that (when done). The short story is that we now have an Allures 44 in excellent condition with a full carbon rig and new sails. We have been able to do this all on our budget and we could not be happier with the boat. To us, JoliFou is the perfect compromise between space and comfort and sailing ability. We have a huge amount of stuff on the boat which all disappeared into the numerous large stowage spaces but the boat carries the weight well. We love the layout and the light down below. The boat fails our initial criteria of aft cabin but we are more than happy with the huge and comfortable forward cabin.

We sleep better knowing that the aluminium construction is super-strong and the internal ballast with light aluminium centerboard makes the boat even more seaworthy. No fears of the catastrophic disaster of a keel falling off, the centerboard case is similar to a traditional long skeg keel (but shallower), protecting the prop and with all of the associated seaworthiness.

In our short time cruising we have had numerous occasions to be oh-so grateful for the shoal draft with the board up. It’s always gratifying to anchor closest to the beach under the incredulous stares of other boats. In fact, the board is up 90% of the time and we only have it down when sailing up-wind or doing tight maneuvering in a marina. It is comforting to know that the boat is designed to be beachable although we have not yet been brave enough to try this out. It adds a sense of security to know that if you do go aground by mistake the boat is designed for it.

The bare aluminium top-sides are not the prettiest in everyone’s books, but we love the fact that we don’t need to be so precious about maintenance and damage from minor collisions with the dock, tenders etc.

The targa arch at the back is a huge plus. It supports an excellent cantilevering dinghy hoist conceived by the previous owners and it is a mount for aerials and radome, enabling us to keep the mast completely free of excess weight.
The carbon mast is a GP42 section from Southern Spars Cape Town, who are probably the best reputed carbon spar maker in the world. The rig and spreaders are all carbon and designed around the boat by Southern with the excellent attention to detail one expects from them. The mast section is very similar to the original production aluminium SparCraft section, but in carbon, which means it is super strong for the application. The boom is adapted from an XP44 carbon section, again designed to the boat by Southern Spars. It is a thing of beauty and also super strong for the application. 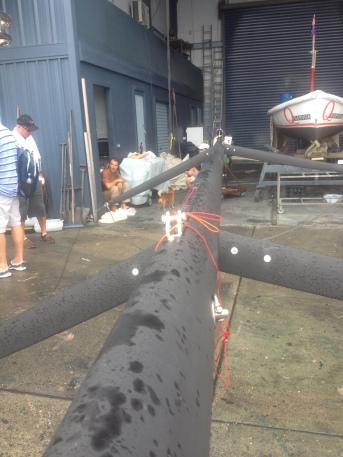 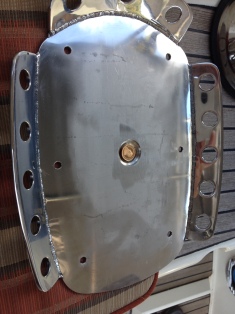 With the benefits of weight saving from the carbon construction, we elected to increase the mainsail area slightly, increasing the mast size by about 1 meter and the boom size a bit, but retaining the same fore-triangle dimensions as the production rig. This has effectively changed the unusual production 9/10 fractional rig into a more conventional fractional rig. We retain the cutter configuration with a hank-on staysail on a detachable soft inner forestay. The new sails are form North Sails, Cape Town with a radial panel construction from North Radian Dacron sailcloth, which we felt was the best compromise between performance and longevity. So far we have been very happy with all of these decisions. The increased mainsail area is often used and we are very glad of it in lighter winds, but we can easily go to the first reef to revert to a configuration similar to the production spec.

A note on the name. In French “joli fou” literally means “pretty crazy” which seemed apt, especially as the boat is a French make. More importantly, Bruce’s mothers name is “Joliette” (French for pretty little thing) and we wanted to name the boat after her because she is such a big part of our lives and without her and David’s help we could never have bought the boat before selling the house. Also one of Lyn’s (many) pet names for Silus is “Siley fou fou” and a French friend had pointed out the “crazy crazy” translation. So in many ways the name of the boat is after Bruce’s mom and our beloved Silus.